At home and in the office, people are looking to keep their data safe – from work documents to family photos to music and movie archives and more. Doing so goes beyond simply storing data to backing up data. And one of the main ways to accomplish this goal is with network attached storage (NAS). In a NAS system, data is centrally stored on a handful of bays, typically filled with hard disk drives (HDDs). Multiple users can access this data through a local area network (LAN) via Ethernet.

Demands to store, share, and access personal data are increasing. As a result, NAS devices are tasked with balancing scalable performance and affordable cost. Now, NAS applications for small office and home office (SOHO) can get a huge performance boost from WD Red

SA500. This blog post highlights our testing results using this NAS SSD as a caching device for both hybrid and full flash NAS configurations. 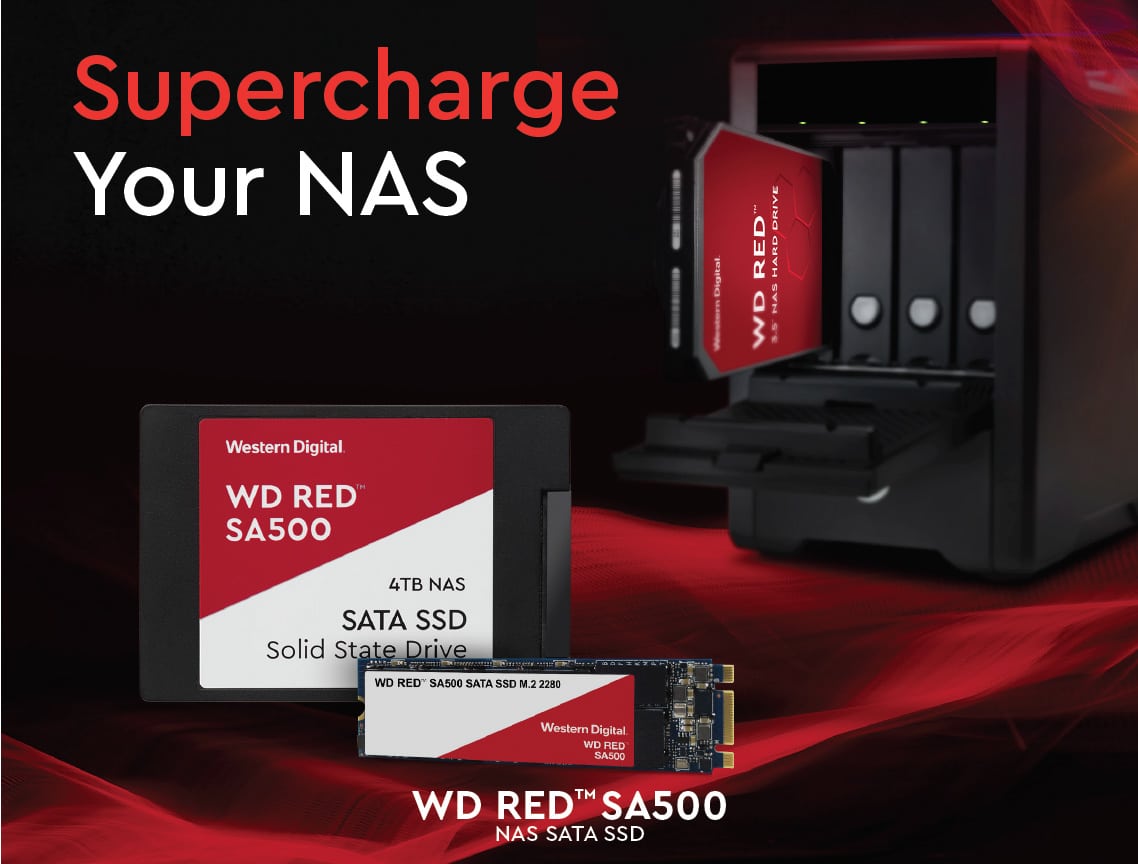 The WD Red SA500 NAS SATA SSD brings together speed, endurance, and flexibility for reduced latency and improved responsiveness. Available in either a 2.5” or slim M.2 form factor, the drive is ideal for caching – whether online databases, NAS systems, 4K and 8K video editing, or other uses. Capacities for this SATA SSD reach up to 4TB to meet your data storage needs.

We partnered with QNAP®, a global provider of network attached storage and video surveillance solutions, and chose to perform the tests on the TSU-963X, a NAS box that offers great expandability with five, 3.5” and four, 2.5” bays. It was a perfect match for both our cached mode and full flash configurations to be tested, since we could fit four SSDs in the 2.5” bays. Additionally, the device offers a standard 10Gb Ethernet (Gbe) interface, which provides a high-level of performance to the network.

Our test bench included a single PC with the following specifications:

We created 2 storage pools: one made with a RAID6 of 3+2 HDDs, and a second one (after running the hybrid configuration tests) based only on the four SSDs assembled in a RAID5 (3+1) to maximize the full flash capacity. The formatted capacity was 16.35TB for Storage Pool 1 and 2.43TB for the full flash Storage Pool 2. All NAS access was made through the 10Gbe port on the TS-963X.

Here’s an image of the storage pools being setup on the QNAP interface. We used a RAID6 of 3+2 HDDs. Then, we built a RAID1 made of two, 1TB drives – each a WD Red NAS SSD. This RAID1 served as a cache for the nearly 8TB of data capacity created on the QNAP device.

To avoid large cache effects, four files of 500GB were used to generate the I/O workload. We decided to focus on the 128KB transfer size to realistically simulate an average file size. In addition, we used working threads to simulate a certain number of clients simultaneously accessing the NAS system.

With diskspd, each thread accesses each file. Thus, using eight working threads with four files replicates an environment with 32 clients accessing NAS. We then ran the tests with a growing number of clients, a workload of up to 30 percent writes, and up to four outstanding requests. As the results show, cached RAID6 outperformed non-cached in every scenario tested. In many cases, using WD Red NAS SSDs as a cache boosted MIB/s by 50 percent or more. The gap grew even greater when fewer clients were connecting to the NAS. Since data was accessed randomly, performance improved as the number of writes increased because all writes were cached. The opposite was also true: fewer writes and more reads led to slightly slower speeds.

In addition to a hybrid configuration, we also tested an all-flash NAS arrangement. We broke the cache and assembled a full flash storage pool with four, 1TB WD Red NAS SSDs.

We decided in this run to use a set of benchmarks with up to 50 percent writes and varying transfer sizes of 4K, 8K (to simulate online database access) and 128KB (for file access). The results below are for 8 clients – also called “threads” – per 1 TB file with full random access.

Overall, we found that increasing the number of clients in this test did not increase performance. This result implied that we were hitting a wall. Still, the results were impressive, as we managed to sustain over 15,000 IOPS from a RAID5 of four drives. To compare it to the raw SSD specification, this is not run on a single drive; there is a filesystem and the devices are not directly attached to the host, but connected through the network. We wanted to test the WD Red NAS SSD as a caching device for both hybrid and full flash NAS configurations. In many regards, the performance results were outstanding. Our cached results show we can achieve more than a 50 percent boost in performance over non-flash configurations – with even higher peaks.

To sum it all up, the WD Red NAS SATA SSD gives a huge boost to NAS SOHO applications. As I mentioned before, these drives are designed specifically for caching through tiered data storage. If a low number of writes and non-continuous sustained performance is needed, however, full flash applications are feasible. I encourage you to learn more about our family of SSDs across enterprise, consumer, and SMBs.

A Memory Card Moment, 20 Years in the Making

Fabrics and the New Data Infrastructure

A Memory Card Moment, 20 Years in the Making

Ready for the Rise of Smart Fleets?

The Next Game-Changer Is in the Cloud

Game Changer The most-played game of the 2000s was not Wii Sports, Grand Theft Auto, or The Sims. It was…

What Happens After Moore’s Law?

In March of 2020, some positive news was buried in virus panic: using advanced stem cell technology, doctors cured a…

What Is “Next-Gen”? How SSDs are Shaping Gaming’s Evolution

In November, Sony and Microsoft released their newest home video game consoles. Along with a bevy of new games and…

The Project That Never Sleeps